Play the demo on Itch for a limited time!

Corruption has seeped its way into the heart of Talpa and the Guardians who once
protected it. Now, it is up to you, to restore balance to the dying order.

Play as Blu, a young Guardian, in her quest to reclaim Talpa from the hands of the Corrupted.

Conquer hand-crafted levels in this side-scrolling adventure. You’ll need to rely on your reflexes and quick wit to solve platforming puzzles and outmaneuver your enemies.

Learn and utilize an extensive set of attacks and dodges that caters to YOUR style of play. Your enemies will also exhibit moves that warrant attention - study their timing and strike decisively.

Navigate dungeons, watching for fatal traps and ambushes from the Corrupted. Carve your own path through Talpa. Explore vibrant areas like the Seaweed Forest, the Bay of the Forgotten, or the Plains of Memory.

Wield a mighty blade, watch head rolls with the swing of an axe, sunder your enemies with a heavy hammer and abuse weak spots through swift movements of your daggers.

Keep your distance and fire barrages of arrows and daggers imbued with elemental energies of frigid cold, swelltering fire, cutting winds and unmoving earth. The choice is yours.

Ready your fists with gauntlets of power capable of boosting your natural capabilities in and outside combat. Become sturdier, hit harder, move faster, and deflect attacks.

Level up your skills and find helpful items that are scattered along the way to help you. However, you must also be more than what you wield, as skill and determination will be your closest allies in this war.

Cleanse the Guardian stones and bolster yourself with their arcane powers. These magical stones will allow you to cast different elemental spells which harness the powers of ice, fire, earth and wind.

In the wake of corruption, your enemies are varied and vast. From common orks and golbins, to menacing trolls and haunting golems, each enemy will pose a new and unique challenge of their own. Dont let your guard down!

The once lush and flourishing world of Talpa has now fallen into the hands of the
Corrupted. Environments that were once vibrant and full of life, are now infected by
the evil that plagues the land and all of its inhabitants.

For centuries, Guardians have been chosen by the Order to preserve peace in the kingdom of Talpa. In order to help him in his duty, each chosen one is entrusted with a legendary stone, which he must wisely use to maintain the balance of forces.

But the day a council member corrupts the sacred stones, he breaks a seal from ancient times that unleash diabolical energy, which now spreads over the lands of Talpa.

This dark energy awakened the Corrupted, vile embodiment of elemental stones, which took over the guardians, who now seek to reanimate Wohlra, and uphold a dystopian future in which he reigns supreme.

With all of the guardians under the influence of Wohlra's will, the fate of Talpa rests on the shoulder of the only uncorrupted warrior.

Blu, a young guardian without stone, found herself untainted by the evil takeover of Valor, making her the last hope to restore the balance of Talpa.

With her unmatched ninja skills, abilities, and reflexes, she is all the world has. And when all she knows is at stake, failure is not an option.

Hello this is Mike Kim from South Korea.

I work for a company called Intragames and we are a publisher.

I want to discuss with you on potentially co working.

hi there how do you take good quality screen shot

their could be one improvement, when i played the game the Ai where walking into each other so that could be a improvent.

Thank you for this feedback, yes that's planned. When it's two times the same enemy they can even overlap and blend each other in a very strange and disturbing way. I'll try to improve it in the upcoming weeks.

you should be proud of yourself

Oh my! thank you soooo much for this kind comment, I just answered the previous one just before to read this one. And this is probably be the last thing I'll see before going to bed. Thank you a lot!

Haaaa thank you very much!
As my kickstarter campaign just started and I received a lot of feedback, the demo should be improved in the upcoming weeks!
Also with a Hard mode if you find it too easy ;)

Pretty good demo overall. The 2D-art is great (the pause-screen is amazing!) and the polygon models are pretty good too. The music is definitely the best part of the game, it perfectly captures the atmosphere you are going for.

I quit after dying twice, both times because my character got softlocked between two baddies attacking him. I feel that you should be more forgiving with your checkpoint placement, to prevent people from feeling like they lose a lot of progress :p

I tried out both control schemes, but neither seemed great to me. For the arrow-key layout, I found hitting the attack-button really bothersome and awkward. For the WASD layout, it really broke the flow that I had to take my hand of the mouse to do certain actions (unfolding ladders). A gamepad control-scheme would definitely be preferable, though I assume it's absent due only to this being a demo.

I'd also say that the game felt quite slow and clunky on the whole. It controlled relatively well, but everything just felt sort of off. Most of the animations could benefit from some touch-up as well, though I will say that the attack-animations were pretty great.

On the whole though, you seem to be going in the right direction. Good job and keep it up! I look forward to seeing more of the project.

Hello! thank you for your feedback =D

About being locked, yeah unfortunately I just add the Medium and Hard Level two days ago (VERY BAD IDEA) because some people found the first demo too easy and I didn't anticipate that this situation it could happen. Really sorry about that... It really messed the first experience of a lot of people :'(

I just posted a new build with no hard mode and a rebalanced medium mode. I will try to fix the problem asap at a deeper level very soon to make it more fair and engaging for the player, someone already suggests me a very good idea, it should be done in the next couple of days.

About the keyboard mapping, I'm sorry about that too ^^, I always play with a controller so I didn't really know how to map them. I just had a lot of feedback on it, I'll change it next week fore sure. But the controller should have worked thought :/ It is possible that the layout is only displayed if the controller is a Dualshock or a Xbox controller, but technically, you can enter the game and still play with the controller, you just have to figure out the controls during the tutorial. Did you tried with a PS or Xbox controller or one from an other platform?

And in general, I will improve the game on many points. I'm solo on it so I just had the necessary technical feedback before the demo was released, but not a lot of "real players" played it, so there were a lot of things I wasn't aware about. Also I took time to polish some things, but there are also things I just let in their "just working" states. I'll do my best to make it better very soon!

Again, thanks a lot! Hope you'll get the chance to retry the demo in the future :)

That's a problem on my part then. Great to hear that controller support is already included! I guess I was initially confused by the "Keyboard only" text in the controls menu, though I now know what you mean.

I played through the demo with the updated difficulty, and actually managed to finish it this time! The difficulty is a lot better now, though far from perfect. I still think game overs lead to much more frustration than they should. Losing all of your money is a big pain, and other things such as unfolded ladders resetting is also a questionable design choice in my opinion.

I liked the weapon variety , abilities and bosses.  Though I've gotta say that the game doesn't feel much like a Metroidvania. It was quite linear safe for a few keys, and also very combat focused. That's not necessarily a problem, it just wasn't what i was expecting. Generally I'll also say that keys are a quite boring way of locking off certain parts of the world, and that more ability focused locks would be preferable.

I discovered a few bugs during this playthrough, but that is to be expected, and it was nothing game breaking.

Little things like the tutorial birds and the dancing shopkeeper definitely put a smile on my face. You are clearly passionate about the project, and it shows! Keep up the good work. Looking forward to more!

Thank you very much. I will!

I take note about the locking system. I will also take some time to adjust the different levels of difficulty very soon.

I'm posting a new build where the player don't have to put his hand off the mouse (Refuse and Accept also work with W and S), character turns toward the mouse and WASD keyboard + Mouse has been set by default.

If I may ask a question, in your first post, when you talked about the position of the attack button being awkward, Do you mean the "Special Attack" button in this config?

Thank you very much for the valuable feedback :)

I was actually thinking of the attack buttons on the "Only keyboard" layout. They are in a position that makes it quite uncomfortable (for me at least) to use. I quickly found out that I way prefer the keyboard and mouse setup, though I do still think that the special attack button on Ctrl could have a better placement. I personally think the control button is too far down to reach naturally, so maybe the middle mouse button (clicking on the scroll wheel) would be a better choice? The same goes for the heal button, which I think could be more optimally placed on F or E.

You're totally right! I use a special WQSD config for AZERTY keyboard to play games (French problems ^^), so I didn't noticed that the Ctrl was sooo far from the other buttons... it's totally irrationnal to have to bend the little finger so much to reach a key, not here to play guitar haha.
Thank you very much for the feedback and the little talk, it was really pleasant to share thoughts with you :)
Have a nice week-end!

Just finished the demo, it was very good !
The music put you right in the mood for action, and the level design is perfect for some deep exploration.

I'm glad you enjoyed it!

Thank you so much for playing it! I found a lot of interesting things in your video!
Have a great sunday!

Arf, so sorry about the saw at the end :/
It will be corrected for the proper demo next month ;) 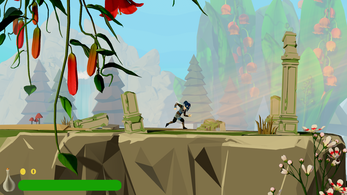 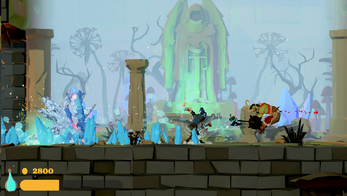 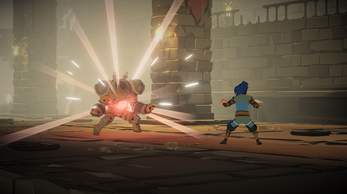 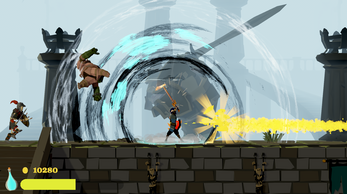